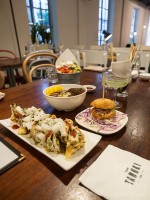 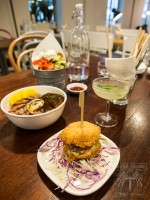 I don’t usually photograph my food, but dropping by Tanuki Raw with Ness at the National Design Center was somewhat inspiring. The spread:

We basically got a free slider a pop (yes that’s fried breaded bread. Very meta), the Poutine Fries, Foie Gras Truffle Yakiniku beef bowl and an (interestingly named) Instagram This Maki. And a couple potent drinks, one of which being the Moscow Mule (not pictured, because it was awesome so it went down quick. Ginger beer + Vodka + Lime works real slick ) and another being a gin/mint/something concoction whose name escapes me. Along the way, we had an opportunity to sample the Spicy Negitoro Harumetto which I will elaborate on later.

In order of awesomeness, the Poutine Fries comes first. Now, consider this something of a personal bias, but I generally expect more than a spot of cheese and sour cream on crisscut fries to have a dish qualify as poutine. Sadly, this particular concoction just did not work. The chunky bits were invariably consumed separately from the fries, making it neither poutine nor harmonious. That is sad.

Starting to get better: The Instagram This Maki. I fail to understand the origin of this name, but I suppose that means it should be photographed. A deep fried maki roll with yakiniku steak and bacon along with other condiments, the batter proved to be a tad on the heavy side, but remained sufficiently crisp to be palatable. This is something you don’t want to leave sitting around, or it’ll get dull. The yakiniku was definitely the highlight here.

Next up is a complimentary slider whose name escapes me. That is not to knock it, however, for though it was something on the greasy side, it remained crisp and the meat within (yakiniku again I believe) was a bright spot that worked well with the veggies inside that helped manage the richness. Again, another dish that shouldn’t be left fallow for too long lest it become barren.

The rather elaborately named Foie Gras Truffle Yakiniku is actually a rather decent offering, with lovely flavorful rice highlighted with the aroma of truffle, and seared Black Angus beef to be enjoyed with a runny onsen egg on top. This dish works with the foie gras the way a mob works like an army :That is it works individually but needs a little je ne sais quoi to put things together. Actually no, I know what it’d be: The beef proved a little chewy for use in this black and blue presentation. I would have preferred it done medium where the fat starts to liquefy, which would team it nicely with the lovely foie gras. When the egg goes together with it all, it would prove to be a succulent repast that transcends its current unpolished form. Regardless, I would think this is not that bad overall.

Now halfway through the meal, we were presented with this lovely Negitoro Harumetto creation which proved to be rather surprising. In fact, the description of the menu item went along the lines of spicy tuna and veggie stuff in a seaweed taco shell. Which led me to pass on it thinking it was seaweed flakes in corn, which would’ve been quite unappealing. Little did I know it’d turn out to be an interpretation of taco shells, by deep frying seaweed! After a nom I decided this concoction was actually rather darn good! Spicy fatty tuna in a crisp seaweed shell that melds nicely into a flavorful mix that goes down easy. They should just change the description to “crunchy taco shells made of seaweed” or something to that effect. Would definitely recommend coming down if only just for this dish.

And to wash it all down with something that isn’t water: The Southside (Oh look, I just remembered the name). This mint-infused gin with a twist of lime was it. I really appreciated how it looked in the lovely stem however, and I found it to be suitably potent.

On the whole I think the Tanuki Raw experience was pretty good and would warrant a return visit. Especially good considering the lack of crowding at the time of the visit on a Friday night, when I would fully expect the place to be jumping considering those lovely $10 cocktails.

2 thoughts on “A Visit To Tanuki Raw” 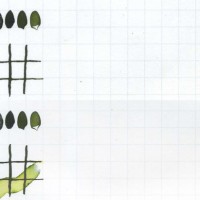